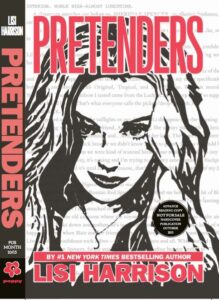 The cover for the advanced reader copy.

Due to the tragic and untimely death of my Pretenders series, the character who leaked the private journals of five students was never revealed. Until now…

While all five had their reasons, only one of them did it. This character was male. He pretended to be emancipated from his parents because his family’s business (they made tampons) caused him to be bullied in the past. So a very wealthy Daniel Ponowitz became Jagger–the cool street urchin.

As the story progressed, Jagger and Audri became an item. The struggle to conceal his identity intensified. At the end of book 2 (the last one published), Jagger discovered that his father was having an affair with Audri’s mother. In “Fake It To The Limit” (the unpublished book 3) Jagger is conflicted. He has this terrible information about his dad, but confronting him might expose his true identity to Audri. So he picks fights with him instead. One of these fights was going to lead to Jagger saying, “I’d rather be homeless than live with you!”  And his father, calling his son’s bluff, would say, “Go for it!”

So Jagger would be homeless for real. Emergency VISA canceled.

Life on the streets would be brutal and Jagger would realize he’s not cut out for this. On one particularly cold and hungry night, Jagger goes to a homeless shelter. The company that donates food and blankets happens to be his father’s. He realizes that people aren’t always what they seem. His father isn’t all bad. He’s done some good too. With this realization, he returns home with a new sense of respect for the family business. He feels terrible for being ashamed of them. For lying about his identity. For deceiving so many people just to be popular.

Leaking the journals becomes Jagger/Dan’s way of absolving his guilt. Leaking everyone else’s proves he’s not the only liar and cheater. Other people did stupid things to fit in, too. Now he wants to encourage people to be more honest and real. To accept their flaws and the flaws in others.

Fall out from the leaks is bad. Once again, Dan is ostracized. But this time he owns it. And he eventually inspires the other characters to accept themselves for who they aren’t and to be who they are.

So there you have it. I’m bummed I never got to finish the series. I truly think it was my best. Anyway, when I was writing, I switched voices so often I made a playlist for each character to help me get into their heads. For those of you who want to keep the party going…here they are. Ignore the weird numbering. Actually, try to accept it for what it is.

1. How To Be A Heartbreaker – Marina and the Diamonds

2. Imagine It Was Us – Jessie Ware

4. Give Your Heart a Break – Demi Lovato

3. Oh No – Marina and the Dimaonds

7. Self Hypnosis – Positive Affirmations for a Better Life – The Subliminal Mind

16. The Trouble with Love – Kelly Clarkson

8. Use Somebody – Kings of Leon

19. Somebody That I Used to Know ft. Kimbra – Gotye