High School did not bring out the best in me. I was a triangle peg being jammed into a square hole. My grades were terrible, I went to summer school instead of summer camp, my parents wouldn’t let me get my drivers license because of said grades, and I had zero extra-curricular activities. I put the ‘less’ in ‘hopeless.’ But I did do one thing right. I always honored my inner voice. And that voice told me that my time would come. I had no idea how or when. I just had to trust it and do what I love in the meantime. So I wrote short stories instead of watching TV. I taught myself to type. And I hosted a style show from my bedroom called: How To Put Cool Outfits Together When You Don’t Have Cool Clothes. Thankfully this pre-dates cellphones and YouTube so the proof is not in the pudding or anywhere else. The point is, none of these silly activities got me into college. But they did speak to my interests and those interests became my career. And the whole style-show thing? I used it in The Clique. Remember Alicia Rivera’s imaginary talk show?

Worrying that you’re ‘not doing enough’ is keeping you from reaching your goals. (See the irony there?) And where did you even learn that you should worry? From other worried people, that’s where. Your fear is a manifestation of all the insecurity around you. You were taught to feel this way. So unlearn it. Now. Fear stands for Future Emergency Already Realized because, duh,

the things you’re afraid of aren’t even happening right now. And who knows what you’ll be dealing with in five years? The only thing you can be sure of is that you don’t have clue. And why worry when you don’t know what to worry about?

I get that you’re growing up in high-pressure times. Competition is fierce and you have to keep up. And I get that stress-related syndromes have become badges of honor. But I also get what it takes to be successful and a lot of that requires an unwavering ability to pursue what makes YOU come alive, even if it goes against the grain. Want to know how many people thought I should quit my safe executive position at MTV to pursue a career in writing? I’ll tell you how many. One. And that was me. Everyone else thought it was too risky. And it was. But if I wanted a career in safety I would have become a police officer.

It’s time to silence the outside noise so you can hear what your inner voice is trying to say. That’s the only voice you should be listening to because its the one that knows what’s right for you. So ask that voice what will make you light up today. When it tells you, act. That action will lead you to the next action which will lead you to the next action and that’s how you’ll find it. Stress and pressure will chase it away.

We are all on different journeys and we get there at different times. I didn’t find my groove until my mid-20s and I didn’t start writing professionally until my mid-30s. We’re like watched pots. We boil when we’re good and ready. 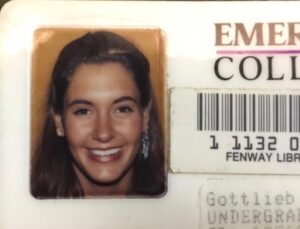 Look! All that underachieving and I made it to college!!